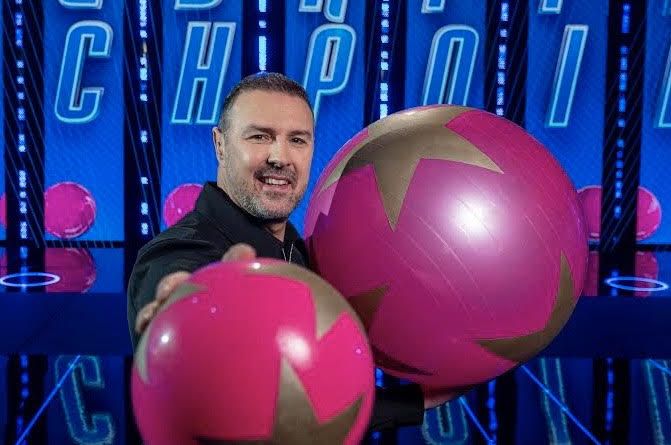 It’s fast, energetic and it has balls! Yes, capture point is back with Paddy McGuinness hosting the game show, but this time all the contestants playing in pairs are celebrities.

The eight-part series of Celebrity hotspot starts on BBC One on Saturday April 23 at 6.45pm.

If you’re unfamiliar with the show, here’s how it works…

In the studio, there are 10 screens that each display a possible answer to a question. When the team has decided which screen has the correct answer, a player is chosen to stand near that screen.

A ball falls from a trapdoor above the screen with the correct answer. This is called the “capture point”. If the team is correct, the player must catch the ball in order to collect money.

If they drop it, they gain nothing.

And even if the team chose the wrong answer, they can still try to catch the ball – if they move fast enough!

“It can get pretty treacherous!” says Paddy. “I’ve seen people rip shirts and all kinds of things.”

Here, Paddy tells us about some of the other famous faces taking part, reveals which celebrity dropped and why his favorite questions are about food…

Can you tell us about some of the celebrities who will appear in the new series?

“In the first show, we have The Vivienne and Tia Kofi from Ru Paul’s Drag Race United Kingdom and Scott Mills and Chris Stark from Radio 1. We also have Denise Van Outen and Fred Sirieix, H and Faye from Steps, Judi Love and Charlene White from loose womenweather presenters Owain Wyn Evans and Clare Nasir, and BBC breakfastby Mike Bushell and Louise Minchin. It’s a nice mix and everyone who’s been on the show really loved it and got into it.”

“I love watching celebrities play the game. They come to the studio in the morning and they’re pretty cool but after the first round they get super competitive and fight if they don’t catch a ball!”

Are some celebrities more competitive than others?

“Ex-sports stars are the ones who really double down and get serious, especially if their sport is about catching a ball! We had ex-England goalkeeper David James on the show and he was really worried about it. When he was playing he used to get criticized for not saving a goal, so he was worried that if he didn’t catch the balls it would all go off on social media!”

Are there any changes to the format?

“There’s a new thing called Star Ball. Basically, there are two in every game and the balls can drop at any time. If a player catches it, the other team also gets money for it. charity she chose. Also, the team that doesn’t make it in the last round stays on the board instead of leaving like before. So if a question arises, they can help the remaining team if they have a little trouble. It happened on a show and it was the wrong answer, but they still managed to catch the ball and that’s the main thing.”

The show involves a lot of running and diving to catch balls and earn money. Have there ever been any accidents?

“It can get pretty treacherous! I’ve seen people rip shirts off and all sorts of things. Funnily enough, Louise Minchin took a small fall. As she was trying to catch a ball, she fell in the side of the stage and landed on her bottom. My heart was in my mouth. She was fine though. Competitors are offered pads, but it’s up to them whether they wear them or not. Nine times out of ten , they say no, but after a few games they think, ‘Maybe I should have put on knee pads.'”

Who would you like to see on the show?

“It would be nice to see my Top of the line pals Freddie Flintoff and Chris Harris in double act, just because of their height difference! Fred will more or less be able to raise his hand and catch the ball but Chris will probably have to run a bit!”

“Watching him play is quite different from doing it yourself. It sounds simple, but when you’re looking up to catch the ball with all the lasers and music, it’s not that easy. Celebrities play for charity and they’re really pissed off if they don’t catch the balls I enjoy the luxury of not putting myself under that kind of pressure and just reading the questions.

Are you involved in developing the questions?

“No. But I’d like to say yes because those are good questions! There was one about the order of Brits’ favorite biscuits, and another about pub names, so I like how random they are.”

If you were a candidate, what questions do you think you would be good at?

“I think I’d be okay with comedies and cars, obviously, and anything involving unhealthy foods like takeout, cookies, chocolate and pop!”

$10.5 billion in Paycheck Protection Program loans have been issued to 84,000 Long Island businesses and nonprofits