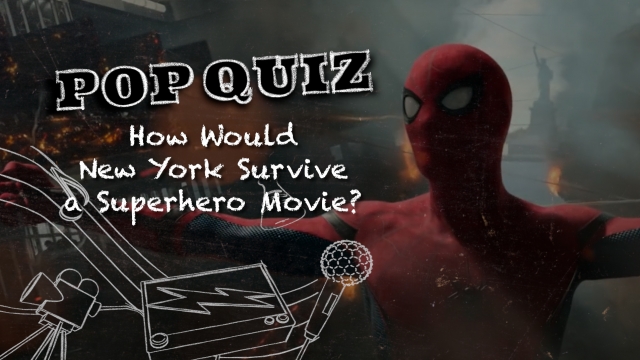 In this “Pop Quiz” segment, Newsy’s “In The Loop” explores what a superhero battle in the United States would really look like, from costs to cleanup.

From disaster movies to sci-fi to fantasy, New York City seems to get beat up quite a bit in movies, especially in the superhero genre. In the canonical Marvel Cinematic Universe alone, New York is destroyed in about a third of the movies, and that’s just one superhero world.

So how does New York actually handle all the real chaos?

Disaster experts like Professor Sam Penta quickly wonder who is cleaning up the mess.

“I’m a fan of superhero movies,” Penta said. “Even though I love them, when I look at the destruction that’s going on inside them, I kinda die inside because…then I think, ‘Oh, that’s 10 years of work and probably millions of dollars. “”

A disaster costing firm said The Hollywood Reporter that the estimated total cost of damage from the Great Battle of New York at the end of 2012’s “The Avengers” would be $160 billion. For reference, NOAA estimates for Hurricane Katrina the costs were about the same at $161 billion, and Sandy was about $82 billion.

The company that analyzed “The Avengers” looked at different insurance policies to see what would be covered here. For example, most home insurance covers “an act of God”, which usually means natural disasters. But, there might be a legal case that applies here, since the movie’s villain, Loki, is technically a god.

Part of the reason these exorbitant costs are difficult to calculate is due to the diversity of disaster response and insurance policies. This can often lead to confusion as to who pays the big cleanup and recovery bills, both at the government level and at the individual level.

“There are also organizations that have defined missions that clarify who does what,” Penta said. “At the same time, in execution, it can be messy and hard to parse. You have people who really know how disaster response and recovery works, working alongside people who are really new to this process. This combination can make things really complicated in terms of what disaster recovery will look like in the months and years that follow.”

To use just New York as an example: in the year after the 9/11 attacks, less than a quarter of the federal aid that had been promised had actually gone where it was supposed to go. This delay was primarily due to city and state officials not knowing how to distribute the billions of dollars.

Related storyNatural disasters are getting worse, but so is FEMA’s aid to survivors

Just over a decade later, after Hurricane Sandy, aid groups like the Red Cross have also been criticized for late responses and mismanaged resources. FEMA and private insurance companies also drew criticism when flood victims were stuck waiting to settle flood insurance claims for years after Sandy. In some cases, FEMA ended up charging the victims, accusing them of receiving help from different groups to cover the same costs twice.

One of the Marvel movies actually hints at an interagency conflict in the cleanup efforts. In “Spider-Man: Homecoming”, a semi-private organization called the Office of Damage Control clashes with city contractors over who gets paid to clean up Grand Central, which forms the Vulture’s origin story.

Delay in relief can have quite devastating consequences for households.

This year alone, it has been reported that every request for flood damage assistance after Hurricane Ida has been denied by the New York City government. The Department of Emergency Services pointed to a 1907 law that says the city is not liable unless damages are due to city negligence.

It’s not just New York: FEMA has come under fire in recent years for denying disaster claims nationwide at historically high rates. Where FEMA has failed to help, private lenders are stepping in to help homeowners — provided they are repaid with interest.

Many experts would agree that one of the best ways to help deal with damage from disasters, attacks, or superhero battles is to prevent a lot of the damage in the first place.

“Mitigation can really go a long way in reducing human suffering and reducing the financial cost,” Penta said. “Really, if we want these systems to work well in times of crisis, we have to invest in them and care about them when the skies are blue.” 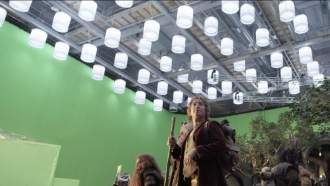 Pop Quiz: Why is CGI everywhere in the film industry?

Take the ending of “The Batman” as an example.

The streets of Gotham, replacing New York, are flooded after the Riddler blows up the levee protecting the city from high tides during a major storm. It’s actually inspired by an actual seawall that just started construction around New York City, originally planned after Hurricane Sandy.

Not everyone can agree on which mitigation plans deserve funding and attention. For example, levees are controversial because they can also hold water inside city limits due to intense rainfall.

“As we experience climate change, it makes this work much more difficult as we see more and more that the historical pattern of patterns, the historical patterns that we have relied on to understand the threats we face, the dangers in our communities may be increasingly unreliable,” says Penta.

There are hints of real trauma and long recovery efforts in some superhero movies, but one thing the movies don’t often show about the city’s response is ordinary people answering the call. in the event of a crisis.

“A lot of times there’s this idea that people will just panic in a disaster and really panic in blind, irrational action based on that fear,” Penta said. “Usually we don’t see that in disasters. People are able to act rationally. Another interesting thing with Marvel movies is clearly that they focus on superheroes and this idea that it’s It’s about a handful of people saving the day. But what’s missing in the background is that there’s actually a ton of people doing a lot to save people. There’s the EMT working in the background. There are the cops trying to do what they can to deal with this threat that they have no idea how to conceptualize.”