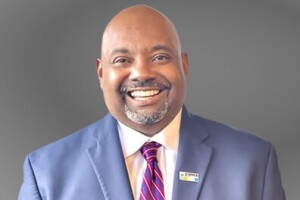 In addition to leading ACSM, he has another important role this year: Chairman of the Board of the Council of Large Public Housing Authority (CLPHA).

What was your first job and what did you learn from it?

The first job I actually worked was park maintenance. I used to cut grass and do landscaping along Martin Luther King Boulevard in Cleveland. I did that for about three years in college. After graduating, I went to City Hall and applied for a labor relations internship in Mayor George Voinovich’s office. I got this job, and that’s where I started my career. That first job taught me whatever you want to do in life, you have to be willing to work to do it. Every summer when I came home and worked, it motivated me to go back to school to take care of business and position myself for different job opportunities as I advanced. It gave me a good ethic.

What was your first housing-related job?

Some of the work I did with the city of Cleveland had housing splashes, but I really didn’t set foot in housing until I came to the housing authority. I started with the Régie du Logement on January 28, 2002. I am starting my 20and year. I arrived as Director of People and Human Resources, and worked my way up to Deputy Executive Director and Chief of Staff, and then to CEO. With each step, I learned more about the industry and the importance of having a unique and flexible skill set in order to manage effectively in this field.

What was a pivotal moment in your career?

We were redeveloping one of our sites. As we prepared to demolish the site, one of our residents said to me, “That’s nice Mr. Patterson. This is a good thing. I just hope I live to see the day it happens. She did it. She was in her 80s and didn’t see her again for several days after that. Sometimes you have people who hear promises so often and are told things are going to happen. To be a part of some of these things going on struck me. It started even more fire to keep doing these things.

What is ACSM working on this year?

We have an implementation grant from Choice Neighborhoods. We are working on this with our partner, The Community Builders. We had a first shovelful of earth last October. This is a major redevelopment of a building that was created in the 1940s, and it will be part of the development that is taking place throughout the community. Sometimes our social housing is seen as an island, isolated in itself. It’s great when we’re part of what’s happening. We view the community as one.

Have you seen a change in the population of residents you serve?

We have created housing for the elderly who have custody of children and minors. Griot Village is an intergenerational development. For a host of reasons, there are parents, grandparents, uncles and aunts who thought they were done with parenthood, but under different circumstances find themselves raising a child. This development has given us the opportunity to reunite 40 of these families and provide them with support services.

What is your program as president of CLPHA?

The discussion on the Build Back Better plan is very important. It is important to look at what is in there and try to find as many ways to disseminate the key elements and use them by housing authorities. We desperately need capital improvements and other areas. We need to invest in housing authorities and invest to provide them with the resources to serve the people we need to serve.

Additionally, CLPHA has done a phenomenal job of supporting housing authorities during this pandemic. The forums they were able to organize allowed the housing authorities to digest, process and learn from each other about something that none of us had a clue what to do or how deal. I commend them for having the foresight to have these discussions and giving people the opportunity to exchange information.

What is the right decision that ACSM made during COVID-19?

The vaccination clinics were very good. I also think some of the calls we made to residents were helpful, especially in the beginning because people were scared. Every day on television you saw a large number of people dying. It was a scary time. We tried to give the feeling that we were there for the residents. We have not closed. We did not go to work remotely. We were here.

Who is your favorite fictional character?

I love all Rocky movies. I can recite lines from each of them to you.

What’s next for Jeffery Patterson?

For me, it’s to do the best I can for the housing authority. I’m here as long as the locals are happy. We have some exciting things going on, and I’m excited to be a part of it. And I want to do my best for CLPHA.