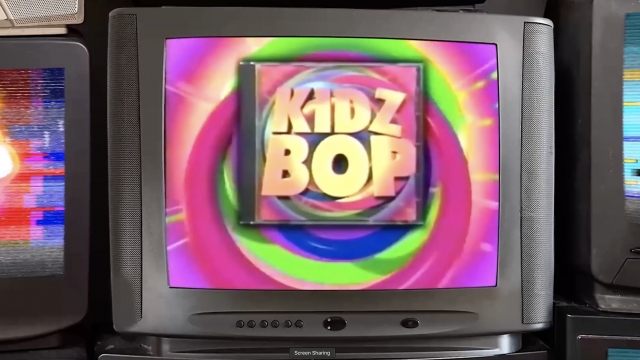 Who is Kidz Bop for? (VIDEO)

Kidz Bop is the epitome of “kid-friendly,” but critics on both sides of the political spectrum still view the wildly successful brand negatively.

Newsy’s new segment “Pop Quiz!” is dedicated to rabbit holes and the twists and turns of the world of pop culture.

How old were you in 2001, and who was your favorite musician at the time? That’s the year Kidz Bop first launched, leading to today’s Pop Quiz! question: who is Kidz Bop really for?

It’s one of the most recognizable brands in the multi-billion dollar kids’ entertainment market, but for those who don’t know, Kidz Bop is the music brand that takes popular songs from artists like Britney Spears or Outkast, changes the lyrics to make it more kid friendly and then the kids sing the changed songs.

Over the past decade, Kidz Bop has grown into an incredibly lucrative brand – recording around 900 different songs, selling over 22 million albums and generating over 1.2 billion streams on Spotify. There have been 24 Kidz Bop Albums That Debuted In The Top 10 Of The Billboard 200which is more than Bob Dylan, Elton John and Bruce Springsteen.

So how does Kidz Bop get real permission to edit and cover these songs?

“The right to arrange is essentially the right to create a derivative work,” said Lisa Alter, music copyright attorney at Alter Kendrick & Baron.

Basically, as long as Kidz Bop pays the necessary royalties, licenses, and broadcast fees to the original copyright holders, they are allowed to modify the music as much as they want. When performing this music live – as they’ve done on many of their US tours – they really need to make sure they’re clear to the audience that they’re not the original artists.

“We’ve all seen a lot of Beatles cover bands and that kind of stuff, but it’s when you start pretending to be the original that you can get in trouble,” Alter said.

The original artists might still complain, but they probably won’t get anywhere. Publicly, the only artist we’ve seen acknowledge that their music’s counterpart is kid-friendly was Lil Nas X tweeting a screenshot of Kidz Bop’s sanitized cover of his song “Montero”.

The brand is the epitome of “kid-friendly”, and on first listen, it’s not hard to see why the brand exists.

Ultimately, Kidz Bop and this whole kid-friendly entertainment market exists for adults just as much.

When Kidz Bop debuted in 2001, it was kind of a compromise for parents who didn’t want to listen to kids’ music but also didn’t want their kids to hear certain lyrics from popular artists.

“A lot of it comes from so much commercial TV having so much sexual content or drinking and drugs and smoking, and parents are like, ‘I just don’t really want my kids to see any of this or hear any of this. that,'” Murphy said. .

In 2001, an FTC report found that “nearly half of theaters sold tickets for R-rated movies to underage moviegoers, while 90% of music retailers sold explicit content recordings to underage buyers.”

Because of this, you could say that Kidz Bop came out in a time of heightened scrutiny of pop culture and its effects on children, but the truth is that these adult concerns have been around for decades.

“There’s always been this kind of conservative element of concern about the welfare of children,” said Kent Bausman, a sociology professor at the University of Maryville.

In the 1980s, the Parents Music Resource Center trained and heavily criticized artists like Madonna, Prince, and Mötley Crüe for singing songs with lyrics deemed profane, violent, or sexually explicit.

“They actually look like they should be in Playboy or Penthouse,” said Tipper Gore, co-founder of the Parents Music Resource Center.

The group was founded by prominent Washington DC women, including Gore, who was married to future Vice President Al Gore. Their work is the reason the “Parental Advisory” label is now put on albums with explicit lyrics and adult content.

“They were making all kinds of psychological arguments that this music was having incredibly harmful effects on our generation,” Bausman said.

The Parents Music Resource Center closed in the ’90s, but its influence can be seen in today’s demands for “family” media – a term that varies among different groups.

“I think in some cases that means heavily edited — a little more scrubbed of any controversial sexual content or profanity,” Murphy said. Families can also be very conservative.

outlets like common sense media offers similar context on movies, TV shows, books, and video games, and the resource also gives advice on how to interact with children about the media they consume.

These outlets are generally politically neutral and non-religious, but several others like Plugged Where Dove are socially conservative and Christian. Beyond scrutinizing explicit content, they also scrutinize media for how it represents conservative Christian values, including criticizing media that includes LGBTQ characters.

So how do all of these different outlets and reviews riff on Kidz Bop? It’s negative on both sides.

For example, songs like Rihanna’s “Love on the Brain” or Britney Spears’ “Toxic” are still about adult romantic relationships, even with Kidz Bop’s stripped-down lyrics, and kids pick up on that.

“There are issues that kids are aware of that are about kids, even if it’s not specifically what parents are arranging for their kids, is there?” said Mia Doces, vice- Chair of Innovation for the Children’s Committee.

For this reason, some children’s media experts and psychologists say it’s more important to actively pay attention to children’s media, to “co-view” or watch things with them and have conversations about it. – rather than just passively playing sanitized media for them.

Projects like the Children’s Committee Podcast “Imagine Neighborhood” was created with co-listening in mind.

“Ignoring it, not engaging in a conversation, is like a missed opportunity,” Murphy said.

“It provides an opportunity to understand what your child is listening to — how they process that information,” Doces said.

The good news is that there are plenty of other options for kids today, including comprehensive streaming platforms, as well as plenty of other guides and resources for parents.